A type of the human papillomavirus (HPV) that is relatively uncommon among all women is more prevalent among women of African ancestry in the United States according to a National Cancer Institute study published in the International Journal of Cancer and co-authored by scientists at the Frederick National Laboratory for Cancer Research. 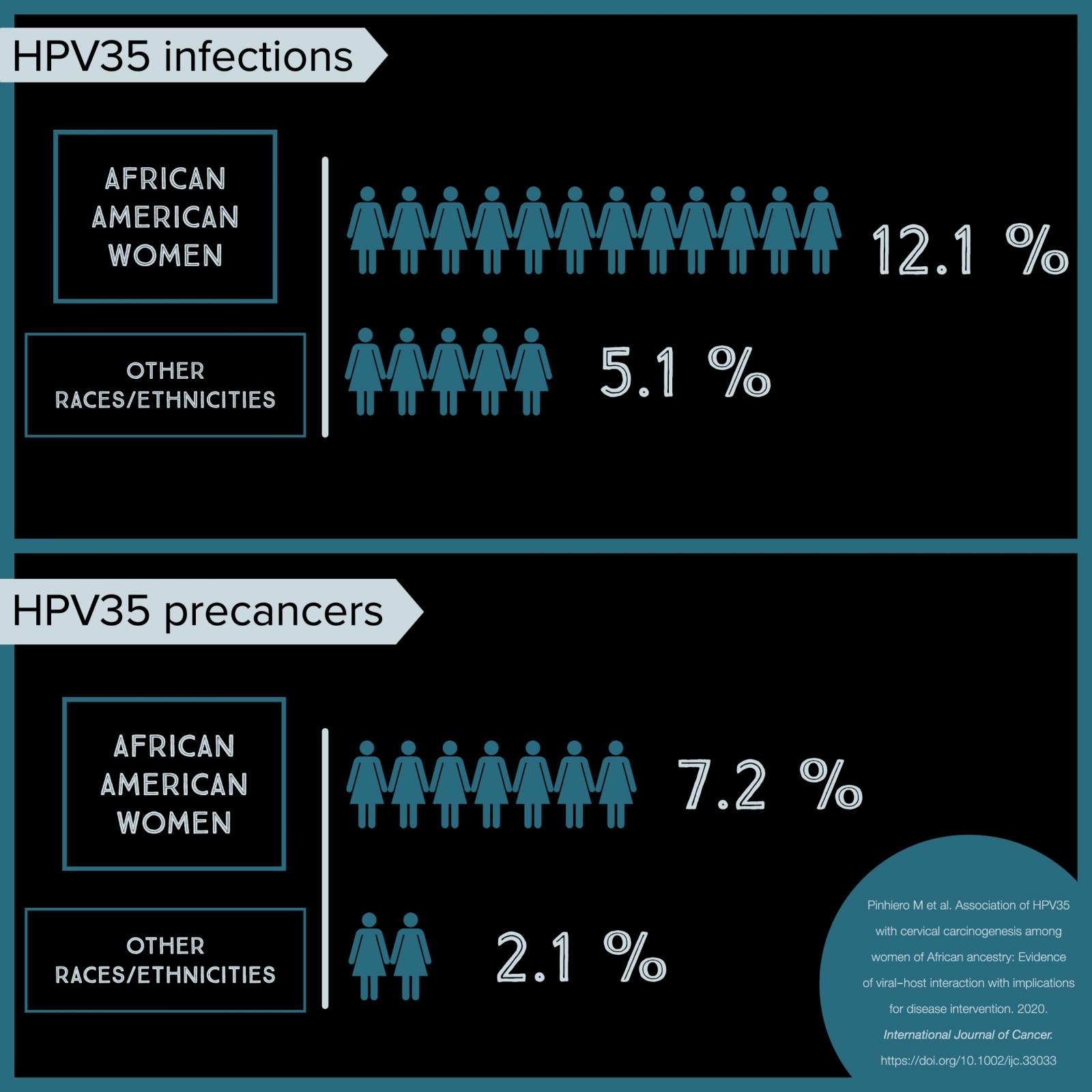 HPV is a common sexually transmitted infection that can lead to cervical precancerous lesions and cancer. The study focused on HPV35, the closest genetically related type to the most common, HPV16. There are 13 oncogenic HPV types responsible for virtually all cervical cancers worldwide. HPV16 accounts for about 60% of cervical cancers globally, while HPV35 accounts for about 2%.

The HPV35 paper combined data from six NCI studies. The investigators analyzed HPV typing from women in multiple longitudinal U.S. epidemiologic studies, and whole HPV35-genome sequence data in a subset of 1,053 HPV35-positive samples collected in the U.S. and internationally. In several Sub-Saharan African countries, HPV35 accounts for about 10% of invasive cervical cancers. Results showed African American women had more HPV35 infections compared to other races/ethnicities (12.1% vs. 5.1%) and more HPV35-associated precancers (7.2% vs. 2.1%).

Using the HPV35 genome data, the investigators further showed that specific genetic variants of HPV35, namely the A2 variant sublineage, were linked to a stronger risk of cervical precancer/cancer in women of African ancestry.

“Everybody’s focused on [HPV]16, but there’s more out there,” said Joseph Boland, Ph.D., the research director of the Cancer Genomics Research Laboratory at FNL, which collaborated on the study. “If [HPV35] is indeed highly prevalent in African American communities, then there’s an unmet need.”

The current bivalent/quadrivalent HPV vaccine protects against two oncogenic types of the virus, and the second-generation HPV vaccine protects against seven oncogenic types. Neither vaccine includes HPV35. Boland said further research is needed to determine whether adding it would be valuable, and why this type seems to be more prevalent in women with African ancestry.

“We weren’t expecting the results to be so highly penetrative,” Boland said. “It’s a great finding and we’re hopeful we’ll keep finding out more.”

Boland and his team worked with investigators at the NCI’s Division of Cancer Epidemiology and Genetics as part of a bigger goal to research less-prevalent, high-risk HPV types.

Senior investigator Lisa Mirabello, Ph.D. said the findings of HPV35 genetic variation and risk of precancer/cancer in distinct populations and geographic regions has been reported for other HPV types.

“The data suggests that if an individual’s race or ethnicity matches that of the origin of the infecting virus, there is increased cervical progression,” Mirabello said.

Even with combined data from six large studies, Mirabello said they still faced challenges such as an inability to directly assess the association of HPV35 and invasive cervical cancers in the U.S. due to the study’s small numbers. They also relied on self-reported race/ethnicity in the study and didn’t have human genetic markers to more precisely define ancestry.

While no next steps have been officially decided, the study’s first author Maisa Pinheiro, Ph.D. said a larger epidemiologic study is warranted.

“Our findings give insights into the mechanisms involved in HPV carcinogenesis and how HPV is able to persist and progress in human hosts,” Pinheiro said. “The relationship between HPV35 and women of African ancestry could be a consequence of thousands of years of virus-host interactions throughout important evolutionary events.”