Frederick National Laboratory (FNL) scientists and their colleagues have identified a genetic risk factor for a dangerous blood pressure disorder in pregnant women of African descent, who are three times as likely to develop the disorder as White women.

The scientists reported in the June issue of the American Journal of Kidney Diseases that when mothers of African descent and their unborn infants have a mismatch in a gene called apolipoprotein L1 (APOL1), the mothers had a 2.6-fold higher risk of the blood pressure disorder preeclampsia. The disorder arises after the 20th week of pregnancy and is a leading cause of premature births because the only cure is to deliver the baby. Preeclampsia is a risk factor for future cardiovascular and kidney disease in the mother.

FNL scientist Cheryl Winkler, who led the study, said it is just one step in understanding the genetic risk factors for preeclampsia. Environmental risk factors may also contribute to onset of the disease. Together, they may explain why the overall rate of preeclampsia is 60 percent higher in Black women than in White women.

For the study, the researchers looked at variations in the chemical sequence of APOL1. The presence of two of these variants, which are carried by 13 percent of women of African descent, greatly increase the risk of progressive chronic kidney disease in these women. The scientists wanted to know if these variants might also raise the risk of preeclampsia in expectant mothers. 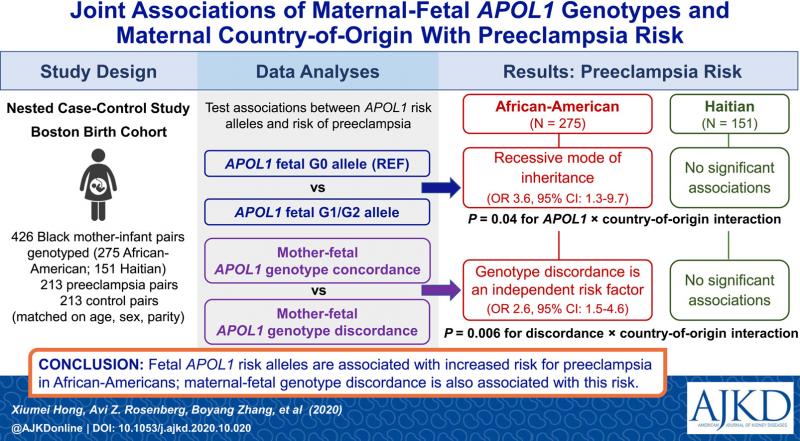 The study focused on a population of women who enrolled in a long-term study of births at Boston Medical Center. Participating mothers volunteer to answer questions about their backgrounds and to make medical information available.

From these data, Winkler and her colleagues analyzed the presence of APOL1 variants in 426 African American and Haitian American mothers and their infants -- 213 with preeclampsia and 213 without. They correlated the genetic information with the incidence of preeclampsia.

For mothers born in the USA with an African ancestry and whose APOL1 genotypes differed from those of their infants, there was a 2.6-fold higher risk of preeclampsia. This is an association, not a cause-and-effect relationship. The authors also showed that if the fetus carried two APOL1 risk alleles, the mother had a two-fold increased risk of preeclampsia. How APOL1 renal risk variants carried by the fetus might cause preeclampsia in the mother remains unclear. These strong associations were not observed in Haitian-born mother-infant pairs, possibly due to differences in genetic or environmental modifiers.

But genetic testing for APOL1 gene variants could identify expectant mothers at high risk of preeclampsia and help improve clinical care with a focus on blood-pressure and kidney issues, Winkler said.

In the same issue of AJKD, a journal editorial noted that genetics alone may not fully explain disparities in preeclampsia risk. The authors suggested that environmental factors -- including disparate levels of clinical care -- could also make a difference. They urged attention to standards of care for Black women compared to those of others.