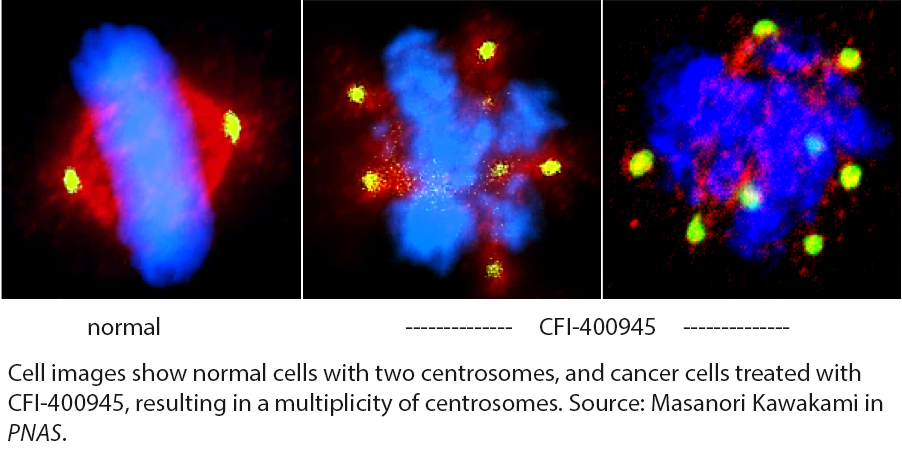 FREDERICK, Md. -- A novel agent now being tested in human clinical trials of breast and other cancers may also prove to be a candidate for treating lung cancer, the No. 1 cancer killer worldwide.

The targeted treatment uses a new approach to destroy cancer cells. It attacks the basic machinery that malignant cells use to reproduce themselves. The machinery malfunctions and the cells die. Normal cells, however, are relatively unaffected, potentially eliminating many side effects.

The approach involves a candidate drug named CFI-400945, which represents a new class of cancer therapeutic. The drug was effective in preclinical studies against breast and other cancers and is now in Phase I human trials at centers in the United States and Canada for patients with advanced malignancies.

New research suggests that CFI-400945 might also be effective alone or in combination treatments for lung cancer. These studies were conducted by a team from the University of Texas MD Anderson Cancer Center, The Campbell Family Cancer Research Institute at Princess Margaret Cancer Center in Toronto, and the Frederick National Laboratory for Cancer Research. Results were published February 6 online in the Proceedings of the National Academy of Sciences.

CFI-400945 works by interfering with a key step in cell division. It targets the phase in which the cell prepares two sets of chromosomes, one for each of the daughter cells that will result from the dividing cell. Each set of chromosomes aligns with a controlling mechanism called a centrosome, two of which lie at opposite sides of the cell. Centrosomes pull the chromosomes toward them, resulting in a full set of chromosomes at two locations that will ultimately become two cells.

CFI-400945 targets an enzyme called Polo-Like Kinase 4 (PLK4), which regulates centrosomes, causing the cell to manufacture extra centrosomes. This results in too many centrosomes pulling the chromosomes in too many directions, which causes cell death. CFI-400945 works selectively in cancer cells, eliminating collateral damage of normal cells and making it an attractive candidate for targeting tumor cells.

“A characteristic of cancer cells is they often have extra centrosomes, but the cells can manage to survive,” said first author Masanori Kawakami, M.D. Ph.D., of MD Anderson Cancer Center in the laboratory of Ethan Dmitrovsky, M.D. “This treatment approach takes advantage of this inclination and exaggerates it to the point that it becomes a fatal defect.”

“Further clinical investigations of CFI-400945, including combination therapies with agents that affect different cooperating pathways, are warranted in lung and other cancers,” the researchers concluded.

“This was an exciting collaboration that took a potential treatment approach for one type of cancer and found a potential application in a second cancer type,” said Dr. Dmitrovsky, President of Leidos Biomedical Research Inc., and Laboratory Director at the Frederick National Laboratory for Cancer Research, sponsored by the National Cancer Institute.