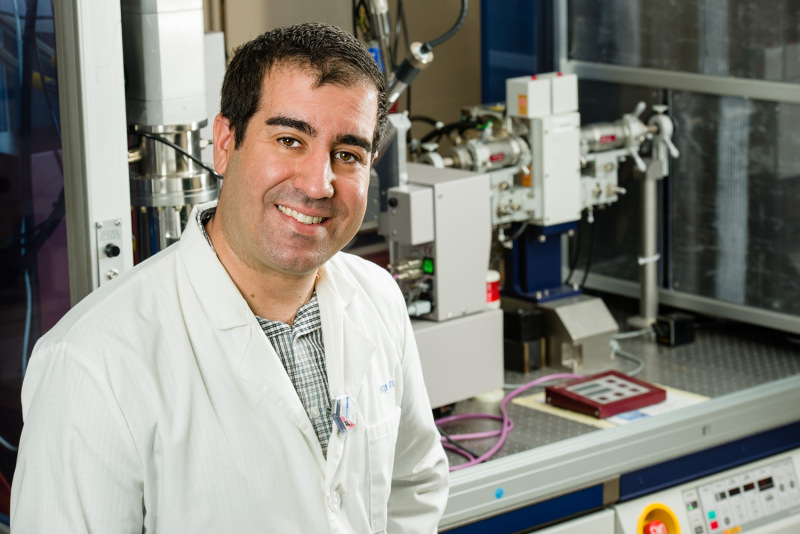 A research team of scientists from the National Cancer Institute and the Frederick National Laboratory for Cancer Research recently identified the structure of a key protein of the virus that causes the highly lethal Middle East Respiratory Syndrome. The team is now using that discovery in the search for new drugs.

The Middle East Respiratory Syndrome coronavirus (MERS-CoV) can be spread from person to person by sneezing, coughing, and even shaking hands. There is no treatment, and four out of 10 infected individuals will die. MERS first appeared in Saudi Arabia in 2012, with some patients becoming infected after contact with camels. The Centers for Disease Control and Prevention (CDC) has been monitoring a MERS-CoV outbreak in South Korea this year. Only two cases have ever been reported in the United States.

The research team used X-ray crystallography (a technique to study atomic and molecular structure) to produce detailed three-dimensional views of an enzyme (a protein that acts as a catalyst) that enables the virus to replicate and cause MERS.

The enzyme is known as the 3C-like protease (3CLpro) of the Middle East Respiratory Syndrome coronavirus (MERS-CoV). The team from the Macromolecular Crystallography Laboratory also depicted the site that the enzyme uses to bind to other molecules.

In the search for new drugs, the team is using a relatively new approach involving screening small compounds to find one compound that will bind to the active site of the protein.

“We are interested in the enzyme as a drug target using a structure-based drug design process,” said research scientist George Lountos, Ph.D., of the Frederick National Lab. The process begins with using a collection of chemical fragments that have favorable drug-like properties. These are soaked into the 3CLpro crystals to see if they bind to the enzyme. Those that do so become lead candidates for development into potential drugs.

The team included senior investigator David Waugh, Ph.D., and biologist Danielle Needle, both of the National Cancer Institute’s Macromolecular Crystallography Laboratory, a part of NCI’s Center for Cancer Research. Their study is published in the journal Acta Crystallographica Section D.

The enzyme processes a long polyprotein existing in the MERS-CoV genome into several nonstructural proteins that are vital to replication of the virus. By preventing this activity, replication can be blocked, thus stopping the virus from spreading.

The CDC is working to identify the source of the virus, how it spreads, and how it can be controlled. The agency has also used advanced molecular detection to sequence the virus genome in order to further identify the characteristics of MERS-CoV.

Because MERS-CoV is similar to viruses that cause severe acute respiratory syndrome (SARS) and the common cold, with similarly structured 3CLproenzymes, the current research may aid in drug development for all three viruses.