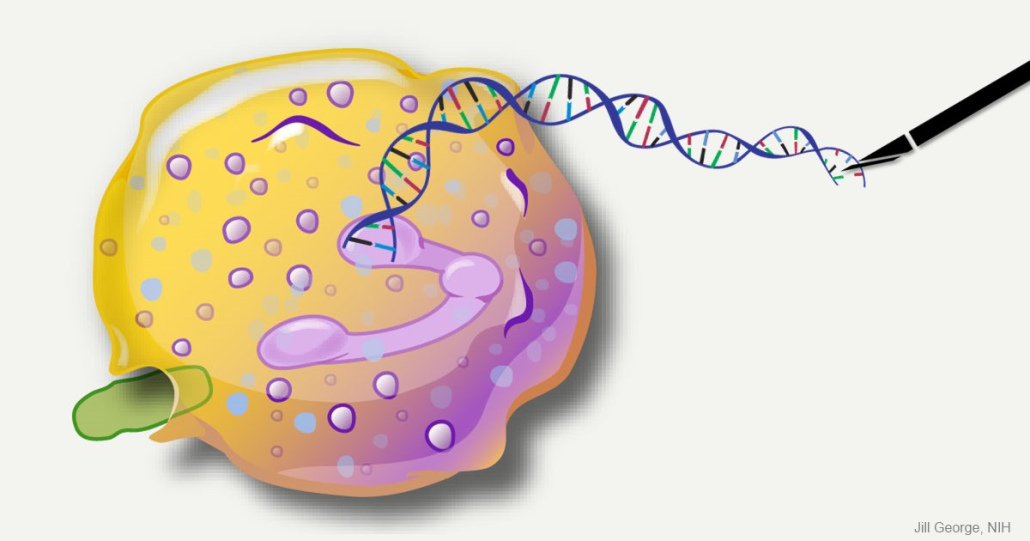 Gene editing using the powerful new CRISPR-Cas9 system is showing promise as a tool for developing potential treatments for inherited diseases, particularly for those caused by single genetic defects.

Examples of these diseases are cystic fibrosis, muscular dystrophy, and the lesser-known and relatively rare immune disorder called X-linked chronic granulomatous disease. Patients with X-CGD lack a functional immune system, and are vulnerable to repeated and sometimes life-threatening bacterial and fungal infections and a shortened life expectancy. Patients are subjected to life-long antimicrobial drugs.

A recent collaboration of the National Institute of Allergy and Infectious Diseases, the Frederick National Lab, and others focused on X-linked chronic granulomatous disease, using CRISPR-Cas9 to correct the underlying genetic defect and show persistence of gene correction in an animal model. Their results were published in the journal Science Translational Medicine.

In X-linked chronic granulomatous disease, a genetic mutation results in white blood cells with little or no function. These cells can be replaced with stem-cell transplants from another healthy individual, but this approach carries risks of the donor cells attacking the patient (graft-versus-host disease) and is limited by the availability of stem cells that match the patient. A direct repair of the genetic defect would overcome these issues.

In the current study, researchers targeted parent (primitive) white blood cells, called stem cells, which are found in bone marrow. The team took stem cells from two patients with X-linked chronic granulomatous disease due to a specific disease-causing mutation. Working in a lab dish, they confirmed that the genetic defect could be corrected with CRISPR-Cas9. The technology homes in on the gene mutation (error in sequence) and makes a precise cut in the DNA. This causes the cell’s natural repair system to fix the mutation when copying off a normal template that is provided. The result is a corrected gene sequence. In this case, it worked in about 30 percent of the targeted stem cells, enough to restore immune function.

Next the team placed about 500,000 to 1 million of the repaired stem cells into each of 36 mice whose immune systems had been suppressed to make room for the human cells. After five months, about 10 to 20 percent of the corrected blood cells were still active, enough to produce an effective army of white blood cells and a functional immune system.

“The field (of gene therapy) has made great progress in the past couple of decades, but is still fraught with concerns regarding vector integration into undesirable sites in the genome,” said Xiaolin Wu, Ph.D., of the Frederick National Lab’s Cancer Research Technology Program and a collaborator on the study. “This new targeted approach really takes gene therapy to the next level of control and precision that is sorely needed. “

There are, however, major issues that still need to be addressed. These include safety, scalability, and, of course, going from mouse to human. Use of gene editing technology also requires careful consideration of any associated ethical issues that might arise.

Wu’s group is developing experimental and computational tools that will help detect unanticipated effects from the CRISPR-Cas9 technology, or off-target effects. The technology is effective in targeting genes for correction, but little is known about potential effects on other areas of the human genome.

“Tools are in development to provide safety information for the Food and Drug Administration, and if risks are identified, this will allow improved designs to reduce the risks,” Wu said. “FDA’s concern is our concern."

The principal investigator on the study was Harry Malech, M.D., Chief of the Laboratory of Host Defenses at the National Institute of Allergy and Infectious Diseases. The lead author was his colleague, Suk See De Ravin, M.D., Ph.D.

Image: This image represents an infection-fighting cell called a neutrophil. In this artist’s rendering, the cell’s DNA is being “edited” to help restore its ability to fight bacterial invaders. Credit: NIAID, NIH