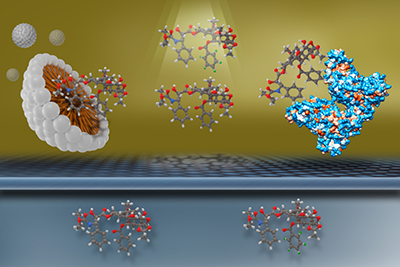 The Frederick National Lab has begun to assist several major pharmaceutical companies in adopting nanotechnologies in early stage drug development, when the approach is most efficient and cost-effective.

Now NCL is working under Cooperative Research and Development Agreements with Amgen, AstraZeneca, and Pfizer on nanotechnology formulations to improve candidate cancer drugs early on, before they are used in first-in-human studies.

The idea is “to apply smart drug formulations early in the pipeline to increase the chance of success for these drugs,” said Stephen Stern, Ph.D., senior principal scientist at NCL, which operates under a collaboration between NCI, the Food and Drug Administration (FDA), and the National Institute of Standards and Technology.

The pharmaceutical industry has begun to recognize the benefits of nanotechnology in developing cancer drugs because nanoformulations can target drugs to tumor sites without harming the rest of the body, and thus reduce or eliminate side effects, said NCL scientist Jennifer Grossman, Ph.D. NCL is a pioneer in the medical application of nanotechnologies against cancer and operates as a shared national resource and knowledge base for all cancer researchers.

“NCL is a highly recognized resource for preclinical nanomaterials characterization and is also expanding to capabilities in nanoparticle-based formulations,” said Piotr Grodzinski, Ph.D., director of the NCI Office of Nanotechnology Research. “With nanomedicine maturing, more and more companies are being interested in this mode of treatment. They seek partnerships with experienced entities, and NCL is a natural choice.”

Since it began in 2004, NCL has characterized more than 350 nanoparticles for medical applications, helped set industry standards for nanoparticle characterization, and collaborated in advancing 10 nanomedicines into human clinical trials.

“We have the expertise in formulation characterization, among the best in the world,” Grossman said. “We have been able to link formulation parameters with biological performance and identify cases where we see a decrease in toxicity or an increase in the exposure to the tumor.”

The collaboration with AstraZeneca will focus on formulating pharmaceuticals for delivery to solid tumors. NCL will produce nanoformulations of small-molecule pharmaceuticals and return them to AstraZeneca for further evaluation both in vitro and in vivo. The aim is to improve how much drug can be delivered without causing toxicity and to increase the efficiency of drug delivery to solid tumors.

With Amgen, NCL will build on an earlier collaboration to produce nanoformulations of a compound to enhance its ability to disperse throughout a tumor. Amgen will evaluate these new formulations.

In the collaboration with Pfizer, NCL will characterize nanomaterials selected by Pfizer as potential drug delivery systems in oncology and immune modulation.

Among the few nanomedicines approved by the FDA for use in patients are Doxil, a liposomal doxorubicin used to treat ovarian cancer, AIDS-related Kaposi’s sarcoma, and multiple myeloma; Abraxane, an albumin-bound form of paclitaxel that is less toxic than other formulations of the drug and is used in combination therapy for pancreatic cancer and to treat other cancers; and ONIVYDE, which is formulated from the chemotherapy drug irinotecan encapsulated in liposome nanoparticles.

Finishing up Phase III clinical trials is VYXEOS, a co-formulation of cytarabine and daunorubicin encapsulated in a nanoscale liposome to maintain the desired ratio after administration for high-risk acute myeloid leukemia.

In a separate endeavor, NCL has entered into an interagency agreement with the FDA for evaluating the bioequivalence of generic nanomedicines compared with their branded counterparts. The earliest nanomedicines are losing the patent protection that guarantees market exclusivity, but generic counterparts have been slow to emerge.

“FDA is looking to us to develop novel methods that will potentially help the regulatory process for approval of generic nanomedicines,” Grossman said.

Under the agreement, NCL will apply a method for measuring the active ingredients from several drug products, whether the drug is still bound with the nanoparticle or free in the bloodstream. It will also conduct in vitro and in vivo drug release studies relevant to establishing bioequivalence. NCL will coordinate with the FDA to select the most appropriate drug products for evaluation, as well as criteria for evaluating performance of the method.

Image: In its interagency agreement with the FDA, NCL will apply a filtration method invented by Stephan Stern, Ph.D., for measuring drug release from several nanomedicine products. The method allows for accurate determination of how much of the drug is bound to the nanoparticle, how much is free, and how much is bound to plasma proteins. This image is a cartoon illustration of a drug (middle) released from a nanoparticle (left) and binding a plasma protein (right), all in suspension above a filter, with the filtrate (lower) containing only the free drug. Image courtesy of Jennifer Grossman, Ph.D., Nanotechnology Characterization Laboratory.