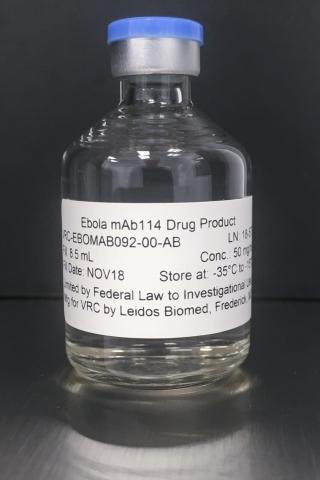 The antibody, called mAb114 or ansuvimab, is marketed as Ebanga by Ridgeback Therapeutics LP of Miami, which licensed the antibody and manufacturing processes from NIAID.

More than 10,000 vials of the drug product were manufactured by the Frederick National Laboratory’s Vaccine Clinical Materials Program in 2018 for clinical trials in the Democratic Republic of Congo (DRC).

“The approval by the FDA of a biological license application is arguably the crown achievement of any sponsor seeking commercialization,” said David Lindsay, Ph.D., director of the Vaccine Clinical Materials Program.

“In the case of Ebanga, a proven monoclonal antibody to treat Ebola patients, the VCMP played a pivotal role in drug substance and drug product supply to Ridgeback Biotherapeutics, the biological license application sponsor. We are gratified beyond our wildest imagination that we could actually help bring a life-changing drug to patients in need,” he added.

A team of NIAID Vaccine Research Center scientists led by Nancy Sullivan, Ph.D., in collaboration with international partners, discovered Ebanga after isolating it from a human survivor of the 1995 Ebola outbreak in the DRC. The Vaccine Research Center conducted positive preclinical studies and a first-in-human trial, then manufactured initial clinical-grade lots with support from DARPA. After that, they turned to Lindsay’s team for large-scale manufacturing for the DRC clinical trial.

Ebanga has become the second drug ever to receive FDA approval for the treatment of Ebola virus disease. The first was the triple antibody cocktail REGN-EB3 (now marketed as Inmazeb), which was granted approval in October.

Ebanga and Inmazeb were evaluated in the PALM (“Pamoja Tulinde Maisha”) study conducted during the 2018–2020 Ebola virus outbreak in eastern portions of the DRC. Both therapeutics substantially improved survival rates in people infected with Ebola and later became the standard treatment in the trial.

The PALM study was organized by an international research consortium coordinated by the World Health Organization and was led and funded by NIAID and the DRC’s National Institute for Biomedical Research and Ministry of Health. The consortium included the Frederick National Laboratory, Doctors Without Borders, the International Medical Corps, The Mitchell Group, and the Alliance for International Medical Action.

The Clinical Monitoring Research Program Directorate at the Frederick National Laboratory extensively helped with regulatory, safety, infrastructure, and logistical aspects of the PALM study. Several other scientific and administrative groups at the national laboratory also facilitated and supported the study.

“It was a unique experience for us to have had the opportunity to be involved from the early beginning of the development of an Ebola treatment candidate to the FDA license approval,” said Olivier Tshiani Mbaya, M.D., a medical affairs scientist in the directorate who helped conduct the trials and previously treated Ebola patients. “The loop is closed.”