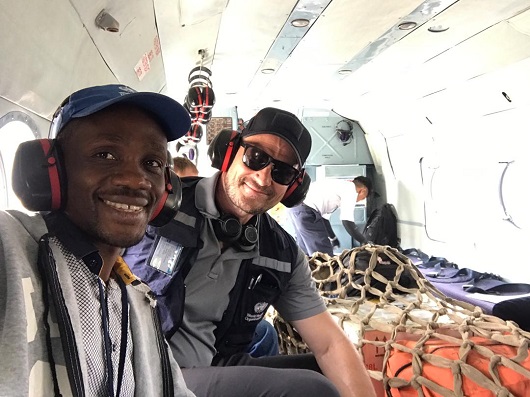 Dr. Ian Crozier Draws on His Own Experience to Inform Studies in Humans and in the Lab

Surviving very severe Ebola virus disease made it clear to Ian Crozier, M.D., that there was a gap to bridge between clinicians caring for patients at outbreak bedsides and the bench scientists peering into fundamental mechanisms of disease to develop prevention and treatment strategies.

As a medical affairs scientist for the Frederick National Laboratory’s Clinical Monitoring Research Program Directorate, Crozier has an opportunity to connect the clinic and the lab toward enhancing research opportunities for both.

Crozier has been deployed by the World Health Organization for more than five months to the outbreak in the Democratic Republic of Congo, providing technical ground support in the optimal delivery of supportive care and investigational therapeutics inside the Ebola treatment units.

Much of this support has been oriented to the first-ever randomized, controlled clinical trial of four investigational Ebola virus disease treatments on behalf of the National Institute of Allergy and Infectious Diseases. The recently published landmark trial has confirmed the efficacy and safety of two investigational antibody-based therapeutics for Ebola virus disease.

Crozier, 49, first treated Ebola patients as a volunteer with the WHO in Sierra Leone. He became infected with Ebola virus in 2014 and was evacuated to the Emory University Hospital Serious Communicable Diseases Unit in Atlanta. His critical illness required a level of life support not previously considered possible in the care of patients with Ebola virus disease.

Grateful for care that was in some ways paradigm shifting for the field, Crozier was eager to get back on the ground to care for patients. The discovery of Ebola virus in his eye just months after he left the hospital – supposedly virus-free – took him back to Emory and then to West Africa with an Emory Eye Team and WHO to learn about and provide care for other survivors.

Seeking Answers in the Science

During Crozier’s long recuperation at his parents’ Arizona home, he began a deeper dive into the historical scientific literature, driven by a number of unknowns around his own disease and later by the same in African survivors. Though the virus was discovered in the mid-1970s, our understanding had many gaps, he said, limited often by the inability to take high-resolution pictures of human disease in very challenging outbreak settings.

“Especially in regards to critical illness and viral persistence and related conditions in humans with Ebola virus disease, the textbook was fairly empty,” Crozier said. “I wanted to know more about it -- perhaps in a small way to contribute to our understanding – and that took me first back to the African bedside and ultimately to the Biosafety Level 4 laboratory space at the NIAID Integrated Research Facility at Fort Detrick.”

It was not necessarily familiar territory -- Crozier jokingly calls himself an “impostor” -- but recognizes the value he brings both as an EVD survivor and as a physician-scientist whose first love is the clinical bedside.

“I’ve spent a lot of time in PPE (personal protective equipment) at human bedsides, and that’s valuably informing my thinking about this disease and its many unknowns -- agility and access to the talent and unique capacity at NIAID’s Integrated Research Facility I hope can help meaningfully focus and perhaps reframe some of our questions of the the animal model,” he said.

What Does It Means to Survive Ebola?

The intensive medical care Crozier and others received in the U.S. and Europe in 2014 raised the ceiling of possibilities in Ebola virus disease management, he said. “Historically, we’d never had high-resolution collisions between modern medicine and Ebola virus,” Crozier said. “And those efforts were not only ‘life-supporting’ (I wouldn’t be here without them), they were also remarkably instructive - we learned a great deal from my case and many others.”

But Ebola virus disease survivors– including Crozier – experience ongoing effects of the disease. The virus has been known to persist in semen, spinal fluid and in fluids in the eye. In his role with FNL, Crozier consults with investigators in the ongoing Partnership for Research on Ebola Virus in Liberia (PREVAIL) clinical trials. These observational studies have enrolled survivors and their close contacts to track and address health concerns that arise, including viral persistence, and to determine how long a survivor of Ebola virus disease remains immune to the virus.

Crozier carries tremendous credibility as a survivor when he’s on the ground in West Africa and in the DRC caring for patients enrolled in the treatment  and observational trials, said Beth Baseler, director of the CMRPD.  He understands the culture and seeks out opportunities for research.

“Ian provides scientific and clinical leadership on our Ebola response, developing scientific protocols and informing next steps and policies,” she said. “He opens up a whole new world for us.”

Ebola virus is but one of the high-threat pathogens being studied at the IRF, and Crozier serves a similar role as liaison between the laboratory and patient care.

“To be able to pivot from the IRF’s BSL-4 space to join many Congolese, WHO, and NGO (non-government organization) colleagues in the ETU trenches and to contribute in small ways to meaningful clinical care and landmark research is a privilege not lost on me. I’m very grateful to the Frederick Natinonal Laboratory  and CMRPD leadership for uniquely enabling a bidirectional agility that I would be hard-pressed to find elsewhere,” he said.