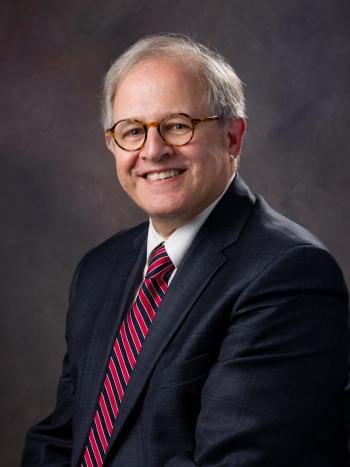 Dr. Ethan Dmitrovsky is director of the Frederick National Laboratory for Cancer Research and president of Leidos Biomedical Research. This National Laboratory combats AIDS, cancer, and emerging health challenges like Zika and Ebola outbreaks. An American Cancer Society (ACS) Professor, he was the former provost and executive vice president of the University of Texas MD Anderson Cancer Center.  Previously, he served as chair of the Pharmacology and Toxicology Department and Interim Dean at the Geisel School of Medicine at Dartmouth and was chair of the Board of Scientific Counselors for Clinical Sciences and Epidemiology at the National Cancer Institute.

As a physician-scientist and oncologist, Dr. Dmitrovsky seeks to move his work from the bench to the clinic. An example is his key role in establishing curative retinoic acid-based differentiation therapy for acute promyelocytic leukemia, a treatment later approved by the FDA. He developed the genetic test used to diagnose and monitor therapy for this leukemia and received the American Society of Clinical Oncology and ACS Award and Lecture for these discoveries.

At MD Anderson, Dr. Dmitrovsky oversaw undergraduate and graduate programs and more than 4,000 clinical trials. He served as Principal Investigator of MD Anderson's National Institutes of Health-funded Cancer Center Core Grant. He fostered collaborations with 33 sister institutions in 23 countries, and launched a pain medicine initiative for cancer patients in Ethiopia. He developed a Provost Protégé Program for faculty of diverse backgrounds, broadened the reach of the Women Faculty Office by adding Minority Faculty Inclusion to its mission and implemented robust programs to support the training and scholarship of research nurses, undergraduate and graduate students, fellows and faculty.

Dr. Dmitrovsky and his team implemented a computer-based tobacco prevention and cessation program for the Houston independent school system that supported 100,000 students and teachers. At the Frederick National Laboratory he is building collaborations with local, regional, national and international research institutions, colleges, and universities. An example is the new Leidos Biomedical Research-Hood College life science conference that builds on the tradition of the popular oncogene meetings of the National Cancer Institute and Hood College. He helped bring to the Frederick National Laboratory community programs that support those who face health challenges like cancer or diabetes.

Dr. Dmitrovsky graduated from Harvard University and Cornell University Medical College. He completed his residency in Internal Medicine at New York Hospital-Memorial Sloan-Kettering Cancer Center and his oncology fellowship at the National Cancer Institute. He directs a laboratory focused on molecular pharmacology. Dr. Dmitrovsky is a member of the American Society for Clinical Investigation (ASCI), Association of American Physicians (AAP) and a fellow of the American Association for the Advancement of Science (AAAS).